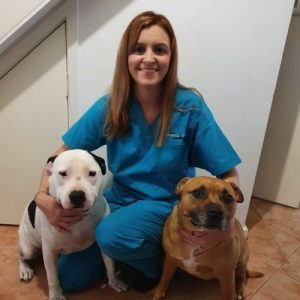 Leah has been working at Coast Animal Health since August 2020. She has her Certificate IV in Veterinary Nursing. Her favourite part of the job is the variety of animals she sees every day.

Leah grew up in Sydney and moved to the Central Coast ten years ago. She lives with her fiancé and their four children. She also has two dogs, an English staffy named Chisel, and an American staffy named Rose, three guinea pigs, Snowy, Cinnamon, and Coco and a Northern Rosella called Ernie. Between looking after her animals and taking her children to their sports commitments, Leah enjoys spending her spare time going to the beach or for a bike ride.

Unfortunately, like many businesses experiencing increasing COVID cases, industry & community pressures, we are not immune to stress.

PLEASE BEAR WITH US as we too are impacted by staff illness, NSW Health testing & Isolation protocols. As a result, Coast Animal Health will be offering contactless consultation only. We are doing all we can to remain operational and delivering quality service during these times.

Thank you for your patience.

Powered by Convert Plus
Go to Top